It’s a shame, but many of the games that were around when I was growing up, have been modernised!

‘Surely,’ I hear you say, ‘This is a good thing, making it more appealing and keeping the game in circulation?’ Well, yes, I have to agree, but why do they have to make them worse?

A few examples spring to mind:

I could go, but there is one game that brings back many memories of my childhood, and alas, has had its heart plucked out in the modern remake – Frustration!

Frustration, or Trouble as it is known in the US, was launched in 1965. It was developed and designed by the Kohner brothers, Frank and Paul, and Fred Kroll. It was originally manufactured by Irwin Toy Ltd. but went on to Milton Bradley, and hence Hasbro.

Its design is a variation of the British game Ludo, which is itself, derived from the Indian game Pachisi. Pachisi dates back to the 13 Century, Late Indian Medieval period, and shares many similarities with Frustration.

Since its release Frustration has remained a popular selling game with families, especially those with young children. Its simple game play means it can be picked up easily by children of the age 5 and up, and rapid turns keep boredom, something any parent knows is a killer to games, from setting in.

Each player has a differently coloured set of 4 pawns, which are initially placed in their starting positions off the main board. To get a pawn out of their start, the player must roll a six. A pawn is then taken from the start and placed in the indicated starting position. The player then rolls again, and moves one of his in-play pawns that number of spaces. The object of the game is to be the first player to get all of their pawns round the board and ‘home’. If another player lands on a space containing your pawn, it gets sent back to the start, and hence, requires a roll of 6 to get it back onto the board. A roll of 6 gives the player another go after moving a pawn.

So you can see, game play is really simple, and pretty much (99%) of the game is luck driven. The only skill comes in when you have to decide which of your in-play pieces to move, or whether to bring out another pawn or not on a roll of 6.

The game itself would be pretty mundane, but it contains a special weapon – one that draws in children, and gives parents a long-term headache – Pop-O-Matic!

Pop-O-Matic is a clear little plastic dome, often referred to as the ‘bubble’, which sits in the centre of the board and is mounted on a flexible piece of metal – the spring. The bubble contains the die, and when it’s pressed, the spring flips the die and the whole thing makes a rather loud POP!

Playing the game at pace, each player trying to pop the bubble as soon as the previous player has removed their fingers, leads to some pretty frantic game play, and, dare I say it, lots of fun!

The sound of ‘popping’ could often be heard through open windows during the 70’s and 80’s, and when I hear it now it brings back happy memories.

Let’s make one thing perfectly clear, its not called Frustration for nothing, and I can personally vouch for that! When I was around 8 years old I had a love/hate relationship with the game. If I was winning, hey, it was a great game, but unfortunately for me, I was hopeless when it came to ‘popping’ a 6, and the same still rings true today!

It got so bad that I refused to play the game; doing what children do when they can’t win, lie on the floor and kick my legs, or stomp to my room banging the door to cries of ‘it’s not fair!’

On several occasions I even threw the game in the dustbin, but something must have given me away, it always got fished out again, and reappeared the next time I suggested playing a game.

I’m guessing though, that it finally ended up in the trash, as it disappeared from my life some time in my early teens, and I never thought anymore about it. That is, until I had children of my own.

Now, remembering how I felt about the game, and in a parent’s vengeful manner, I purchased the game for my daughter, thinking that all children should have the frustration of Frustration cast upon them.

Little did I know how this would backfire! Firstly, the curse of being unable to roll a 6 would again strike me down; secondly, they had introduced the game killing ‘Genie’; thirdly, and to my horror, Pop-O-Matic was no more! In its place there was ‘Slam-O-Matic!

Slam-O-Matic (S.O.M) sees the introduction of four paddles, one for each player, which you hit to bounce the dice that are still contained within a bubble at the centre of the board. Note – I say dice, and we’ll come back to that shortly.  Hitting the paddles jiggles the dice, but you have to hit them quite hard to get a satisfactory ‘throw’, and even then, it produces a rather lame, plastic sounding, pop! Also, hitting the paddles with any force tends to see the pawns taking flight, and the paddles themselves falling out. As well as all this, you can hit the paddle as soon as the previous players dice come to rest, there’s no waiting for fingers to be removed, and you’d think it would speed the game up, but instead, often leads to confusion over what was actually rolled!

Okay, S.O.M produce the same end result as the Pop-O-Matic did, but it leaves you feeling let down and unsatisfied. There was something about the frantic Pop-O-Matic game play, and it’s amazing what affect that ‘popping’ sound added to the game.

The introduction of the ‘Genie’ also sees the addition of the Genie die. A 6 sided die, of which one side is a genie on a green background, one side on an orange background, and the other four are blank. Roll green and you can take the genie from wherever it is, becoming immune to having a pawn taken back to the start. Roll orange, and if you have the genie, place it back on the bubble in the centre of the board.

All this sounds very good, but kills the game. It slows the game play down as you have to look at two dice, and it just increases the luck of the game, especially in a 2-player game, where one player can become untouchable for the majority of the game.

My daughter though, knows no difference; she’s never experienced the joy of producing that great popping sound, and so plays the game with no disappointment in her heart, unlike myself.

I look at Frustration, along with many other modern re-vamps of popular, mass produced, family games, and feel a little sad and disappointed. Producers of games like these keep feeling the need to re-design them, probably in the hope to make them sell better. And the children playing them now won’t know any different, because more than likely they will not have encountered the original. They will, uncomplainingly, and without knowing any different, put up with poor construction and over produced games.

It makes me glad that the majority of publishers, who’s focus are games that are considered a more ‘niche’ market (A consideration that is slowly being turned around), are more in-tune with what makes a game great, and when they tinker around and re-publish it, it is, more often than not, an improvement on the original.

So, to the companies out there producing these mass-market games: Please, let’s not have these flimsy plastic attempts at re-defining a game, one’s that you have to hold together every time you have to touch it; Don’t go ripping the heart out of games that have been a staple of British childhood play for the last half century, give them the games as they were originally intended; And please, if you only do one thing, bring back Pop-O-Matic! 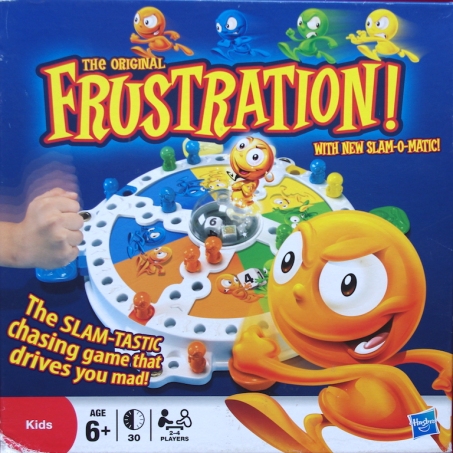 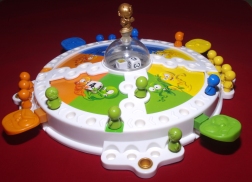 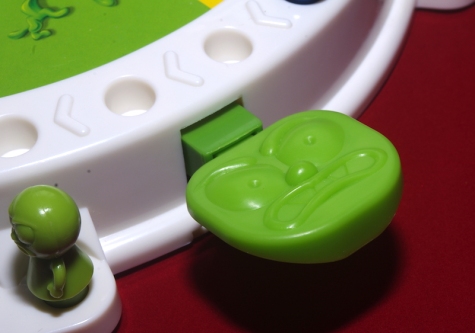 7 thoughts on “Remember When… Frustration & Pop-O-Matic!”

This site uses Akismet to reduce spam. Learn how your comment data is processed.

“All you need to paint is a few tools, a little instruction, and a vision in your mind.” ― Bob Ross

A Blog about any Thoughts in my Head: Politics, Writing, Life

Scent of a Gamer

From the computer to the tabletop, this is all about games. Updated each week-end.

Wargaming with the ability of a dull nine year old

Level up your Marvel: Crisis Protocol game with more XP.

Board Geek Girl
The Regimental Standard

Bird with a Brush

Art in many forms

Anyone can afford wargaming!

Painting In The Dark